Sechelt skatepark to be restored after collective efforts from community 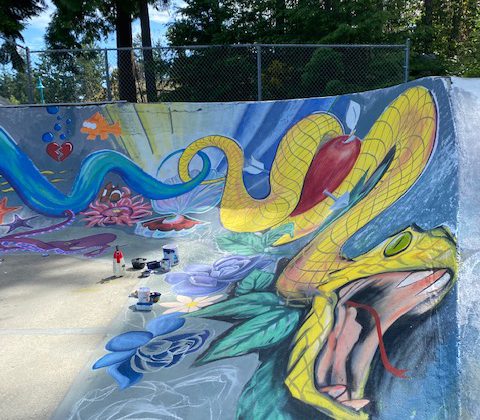 A photo of one of the skatepark's walls, provided by Bob Michor

The skatepark in Sechelt’s restoration is in its final stages after multiple donations from the local community.

Bob Michor, a member of the Rotary Club for the Sunshine Coast, said that if no one did anything about the skatepark, it would’ve been ‘gone’.

In an email from David Connors, ‘the PR guy for the Sechelt Rotary Club’, he said “rotary club members started clearing away the weeds and blackberry bushes that surrounded the park, Michor and other members began removing crumbled concrete and cleaning and re-grouting seams.”

Community support started to pour in.

The Rotary encourages anyone who wants to come paint murals or pictures on the walls of the skatepark to email Bob Michor at bmichor@gmail.com and he will set aside some space for you.

Joe Buffalo, a professional skateboarder, says that in his 35 years of skating, he has gone to a lot of ‘historical skateparks.’

“I would have to say that the one in Sechelt is by far the most unique park with the most character being that it was built a long time ago,” Buffalo said. “I personally find that the older the park, the more well-rounded a skateboarder you’ll be. These new-age parks look like the obstacles were developed on a conveyor belt with no real flow in mind and have no real desire to challenge a skater. One of my favourite skateboarders was from Sechelt and after going there for the first time recently, I know why he was that good!”

Buffalo said that it felt like an honor to skate there, and he’s thankful for the community creating such an impactful place to grow.

While restoring the park, Michor met a man named Dillon Macdonald. Michor says he was “one of the hardest working guys” working on the project.