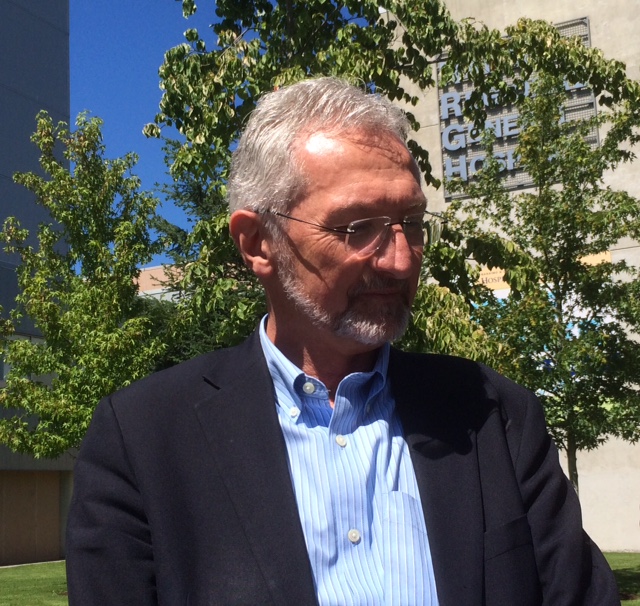 Second term Mayor Leonard Krog and all members of council were sworn in last night at a ceremony at the Vancouver Island Conference Centre tonight.

In his 17 minute address, Krog reflected on his first term while looking to the future.

“It has been a remarkable four years. I can’t say that I enjoyed every challenge. But a life without challenge is a life that’s not worth living.” says Krog. “So having come through the last four years I think we can all take a certain sigh of relief and now look forward to what the next four years will bring.”

Krog was key in saying he believes the last council took a big step foward in governance of the city.

“We restored good governance to this city,” says Krog. ” The fact is that this city had developed a reputation that was less than enviable and each and every [member of council] in their own way contributed to ensuring that we restored respectful behavior to council, that we set a good example for our citizens, and that we restored that confidence which has enabled the city to see the incredible investment and development that it has in the last four years.”

As for those developments, Krog pointed to the record-setting amount of building permits set to be issued this year.

“We are one of the five fastest growing regions in Canada,” says Krog. “We have seen incredible interest in this city. If we had turned off the building permit supply – so to speak – as of June 30th, we would have the second biggest building permit year in the history of Nanaimo.”

Five councillors are returning from last term and among those not returning was Don Bonner, who Krog was sure to thank.

“I say without hesitation, and no disrespect to any members of council, that he was the hardest working member of council,” says Krog of Bonner before mentioning all former councillors. “I would be less than honest if I did not admit that I will miss each and every one of them and their opinion, but I suspect […] they’ll no doubt not be shy about sharing their opinion.”

Looking forward, he says he wants to help build a generational community, one that people can grow in, raise a family in, and not have to leave to find a better life.

Krog made a point to mention optimism on what he says were the biggest issues on the minds of voters, being the mental health crisis existing on the streets and the criminal behaviour that flows from drug addiction. Ones that he says will need help from other levels of government to solve.

“I am hopeful and optimistic that the new premier will take seriously what was on the mind of voters in this province,” said Krog on the issue. “Nobody wants to live in a community where so many of their fellow citizens are sick, are addicted, and are living in the streets.”

In his thanking of the voters, he was subtle in mentioning that voter turnout was a little lower than he would have liked. Turnout is estimated at 23.9% of voters, which is significantly below 2018’s turnout of 35.5%. Despite the turnout, he says voters have picked a good council and one that he was excited to serve with.

“It is an honour and a privilege to do this,” says Krog. “It always has been and it always should be.”