Nanaimo swimming spots will be tested for bacteria 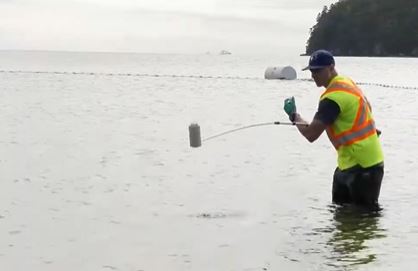 Each year, during the summer months, the City  monitors water quality to make sure the water is clean for beach goers and for wildlife. Staff from the public works department, with assistance from the Nanaimo Port Authority, take water samples from various locations in and around each beach as well as from the waterways that feed into them. The samples are then tested by a lab for fecal coliforms. If the level of fecal coliforms exceeds Provincial health guidelines, it will force a beach closure.

To help keep water clean and beaches open, pet owners are reminded to take their dogs to designated dog parks and off-leash areas. The City says “With shore birds and other naturally occurring wildlife in and around water bodies, adding pets to the mix could elevate the levels of fecal coliforms. The City of Nanaimo has a bylaw in place that states dogs are not to be on beaches or in the water between the beginning of May and the end of September each year. This bylaw is in place for all of Nanaimo’s lakes, streams and waterfront swimming spots, except for those designated as off-leash areas.”

To view the latest beach reports, visit the City’s website at www.nanaimo.ca/goto/beachreports.

City of Nanaimo General Manager, Engineering and Public Works Bill Sims says “Monitoring the water quality in and around some of Nanaimo’s popular swimming spots not only helps keep beaches stay open for everyone’s enjoyment, it also protects the wildlife and aquatic life that call those places home.”

“We can all do our part to ensure our waterways and beaches are clean,” says Sims. “Do not dispose feces, paint, drywall or oils into ditches, catch basins or any water source as they can end up in our streams and oceans.”