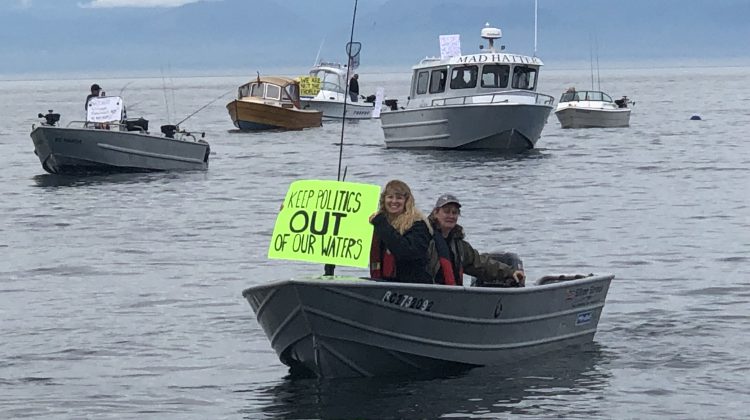 Monday's protest involved a group of anglers and businesses who are calling on the DFO to relax rules regarding Chinook salmon retention. (supplied by Darren Wright, Island Outfitters Ltd.)

A group of anglers and businesses took to the waters near Victoria in protest today.

They were calling on the DFO to relax rules regarding Chinook salmon retention.

The group says they wanted to “voice their concerns about the future of their fishery in the face of a complete lack of flexibility by DFO and acceptance of far better returns of Fraser chinook than were forecast in the spring.”

As well, the group says that recreational fishers in Juan De Fuca Strait are asking the DFO “to immediately allow retention of fin-clipped hatchery produced chinook in order to allow them to survive what has been a difficult season of contrasts.”

Darren Wright of Island Outfitters told the MyCoastNow.com newsroom that 98 percent of fin-clipped fish caught in Victoria waters are from the Puget Sound.

“So they’re not even our fish and right now, right across the border, in Washington State, we can see if from here, they’re open to catch those fish and we’re not,” Wright said. “It doesn’t make any sense.”

Areas north of Nanaimo – including the Comox Valley, Campbell River, and Port Hardy – opened to the retention of either one or two Chinook today (July 15th).

In April, the DFO announced measures that restricted recreational fisheries where ‘at-risk salmon stocks may be encountered.’

The size limit will be in effect from July 15th, with a reassessment of the measure on July 31st.

The DFO says that at the end of July, the vast majority of the at-risk Fraser Chinook should have migrated past these areas into the Fraser River.

Wright said the upper Fraser River is an area of concern because it doesn’t have headwater, and works off of run-off.

The group said thousands of jobs are at stake, businesses are facing closure and the fishery has suffered long term damage due to misinformation provided by DFO about the actual state of the chinook resource in B.C.

On a personal level, Wright said sales of salmon fishing gear are down 80 percent at his store.

“So that means sending people home,” he said. “And if you talk to local charter boat operators (and) guides, they are down 50 percent. And we have a short season as it is. The fishing business isn’t 365 days a year, it’s a short season. So they’ve even shortened it up more.”