Anti-old growth logging protestors gathered outside of the Minister of Mental Health and Addictions’ office this afternoon, bringing a pillory with them.

Activist and retiree, Vic Brice, says a call with Forests Minister Katrine Conroy made him decide to join fellow Extinction Nanaimo activists in their hunger strike. He locked himself in the pillory with help from a fellow activist.

“I was initially a little skeptical of the ‘climate thing’ and then five days ago, the Forest Minister called Howard and Brent (fellow hunger strikers) and basically blew them off,” he said. “That just aggravated the bejeebers out of me. So I decided to join them in solidarity because all we want do to is have an open meeting. There was a picture in the media last week of the Forest Minister smiling and meeting with a bunch of TLA lobbyists. She’s happy to meet with them, but when a few constituents ask to have a meaningful dialogue, she’s not willing.”

He states they congregated outside of Malcomson’s office because she is the elected member for Nanaimo. They have not had contact with Malcomson and some members of the activist group have nicknamed her ‘silent Sheila.’ 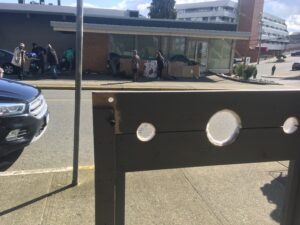 Directly across from Malcomson’s office was a homeless encampment.

“Well, that’s pretty ironic, isn’t it?” said Brice. “The minister in charge of mental health— who’s not in her office, ever— has a homeless encampment. Probably a good percentage of the people in that camp have mental health and drug issues and it just speaks volumes, doesn’t it? They’re not doing enough.”

The full interview is available below.