Traffic was disrupted in Nanaimo’s south end again today, as anti old-growth logging protesters unfurled their banner across the highway at Cranberry Road, in front of the Co-op.

The protesters have vowed to continue blocking traffic in cities across BC, until all logging of old growth is stopped. 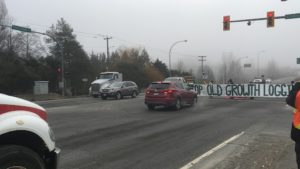 Protesters have used several tactics to thwart police. Today, two of the protesters locked themselves together to make their arrest more difficult, sending officers off in a search for bolt-cutters. In total, three were eventually arrested.

There was substantial police presence at the scene, including 14 police cars and a motorcycle unit. The road was re-opened after about 25 minutes.