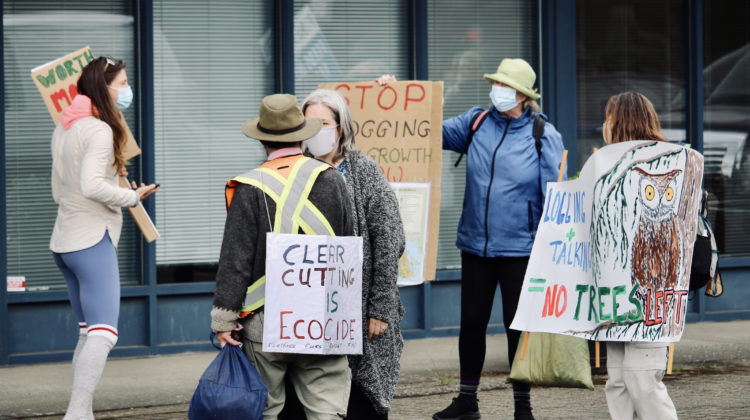 Anti-old-growth logging supporters across B.C. gathered in their respective ridings and hosted a protest outside their MLA’s office today (Thursday).

The planned ‘Worth More Standing’ protests happened in various communities across Vancouver Island, including Victoria, Nanaimo, the Comox Valley, and Campbell River.

On the North Island, participants met by Logger Mike in downtown Campbell River around noon – before marching to MLA Michele Babchuk’s office on the Old Island Highway. Elysia attended the rally bearing a ‘Moms for Old-Growth’ sign. She told My Campbell River Now she wants her young kids to be able to see some of the ancient trees here on the Island one day.

“I think that’s just really important,” Elysia explained, “not only for them to witness the ecological diversity that once existed, but also just for the imagination of it so they can see a little bit of what the world used to be like here before everything was taken down.”

Meanwhile, Maureen told us she participated to inspire others to “get in touch with their MLA and tell them that they want to protect the remaining old-growth.”

Kelly said her husband’s a logger, and told us it’s what prompted her to take part: “Logging pays my bills, puts food on the table. My house is made of wood, you?” Leading up to the rally, spokesperson and old-growth supporter Geraldine Kenny said the fight for old-growth forests in B.C. has been going on for decades. Kenny noted that the “mismanagement of our forests is something British Columbians shouldn’t be proud of.”

“We are losing so many species of plants and animal life. We have to do something to stop this,” she said. “We’re in the midst of a climate change challenge, and leaving old-growth trees standing and their biological communities is our best insurance against wildfires and against climate change.”

The move will protect about 2,000 hectares of the Fairy Creek Watershed and central Walbran areas, while the First Nations build resource-stewardship plans for their lands.

In recent weeks, protesters numbering in the hundreds have been blocking logging roads being built in the watershed.

The First Nations issued a news release, saying they expect everyone to allow approved forestry operations to continue without interruption. They also ask for respect for their constitutionally protected right to benefit economically from their lands, waters, and resources.