Another drug bust in Nanaimo nets fentanyl and firearms 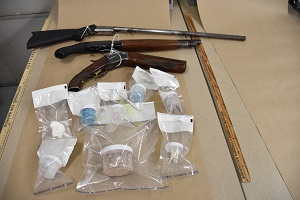 RCMP have made a third significant fentanyl bust in two weeks, this time seizing firearms.

A search warrant was carried out on a residence located in the 1200 block of Nanaimo Lakes Road, in the evening of Saturday, November 6, 2020.

The investigation was lead by the Nanaimo RCMP Drug Unit. But officials say due to a history of violence with the residents, and the possibility of firearms being present, the Vancouver Island Emergency Response Team (ERT) was used.

There were no issues on entry, though three shotguns and ammunition were located and seized.The search resulted in the seizure of 6 ounces of fentanyl, one ounce of cocaine and a small amount of methamphetamine. Additionally, $12,000 in Canadian currency was found.

“This is the third significant seizure of fentanyl in Nanaimo in the past 2 weeks. These seizures speak volumes to the dedication and commitment shown by our officers to eradicate this drug and others from our community. While our officers are pleased with these short term successes, they also recognize they must keep pressure on those involved in the drug trade, as other drug dealers are expected to fill the void left by those arrested,”  said Constable Gary O’Brien in a Nanaimo RCMP news release .

48-year-old Tasha Leone and 28-year-old Kyle Busch of Nanaimo have been arrested and are facing charges.