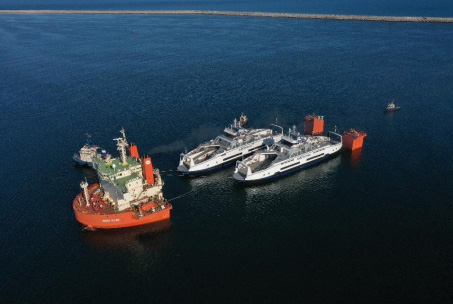 A tugboat assists putting the Island Class ships in place on a semi-submersible transport vessel. Supplied by BC Ferries.

BC Ferries’ new Island Class vessels have arrived in Victoria.

Tessa Humphries with the transportation giant said it’s was a milestone day.

“It’s a really exciting day for us, for both BC Ferries and coastal communities, as we welcome these two new ships to their new homes in British Columbia,” said Humphries. “They’re the first two ships of a new class.”

The ships travelled from Romania and through the Panama Canal on a special semi-submersible carrier vessel.

Humphries said it will take about five days to prepare to unload the vessels for delivery to Victoria’s Point Hope Maritime.

“Point Hope has an agreement with the shipyard to do all the technical and warranty work for these new vessels,” said Humphries. “They are going to be doing some work and recommissioning the ship, it’s something that’s required after transport.”

Humphries said, “This work includes starting up all the systems and final inspections and they will do this work before we take final ownership of the vessels.”

Island Class ferries are designed to operate using only batteries but have a hybrid system installed to use diesel engines until shore charging equipment is available.

The vessels go into service in mid-2020 between Powell River and Texada Island, and from Port Hardy to Alert Bay and Sointula Island.

BC Ferries President Mark Collins said the vessels are a major milestone in a plan to progressively lower emissions across the BC Ferries fleet.

BC Eclipses One Thousand COVID19 Cases

Province Launches Process for Essential Workers to get Child care