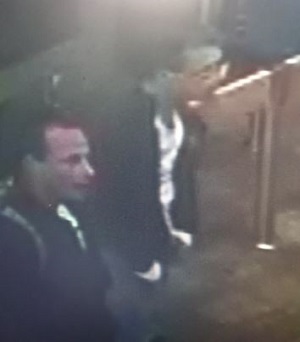 Two suspects who tried to use a credit card at a Nanaimo-area Dairy Queen. Supplied by Nanaimo RCMP.

Nanaimo RCMP has received still images of two men who attempted to use a stolen credit card at a Nanaimo Dairy Queen.

The business in question is the Dairy Queen near the Country Club Mall and investigators have determined that the credit card was stolen the same day, from change lockers at the Nanaimo Aquatic Centre.

Items taken from at least three lockers included a Samsung tablet and investigators believe the two men that broke into the change lockers are the same two who used the stolen card at DQ.

The suspects are described as Caucasian, in their mid-40’s and one has a black eye.

Anyone with information is asked to call the Nanaimo RCMP detachment at 250-754-2345.