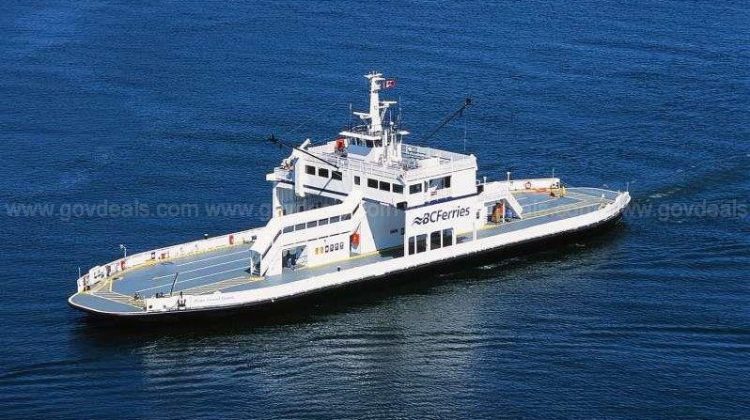 VANCOUVER ISLAND, B.C. – The final bid has come in for the Howe Sound Queen.

When you tack on taxes and a five percent buyers’ premium, the total cost for the durable, 55-year-old BC Ferries vessel is $246,960.

The final auction price will have to approved by BC Ferry Services committee.

BC Ferries executive director of public affairs Deborah Marshall cautioned that the ship won’t be officially sold until the bid is assessed, “to ensure that (it is) a viable bid.”

“The vessel has not been sold at this point,” Marshall said.

According to GovDeals.ca, the Howe Sound Queen is currently in operation until the first week of June, when “it will be removed from service and kept warm and in operational state until ownership change.”

The reason the ship was being auctioned is that it is scheduled for replacement.

Built in 1964 at Quebec’s Marine Industries Ltd., the ship is the only BC Ferry built in Canada outside of this province, according to West Coast Ferries.

She was previously named Napoleon L. and operated in Quebec until 1971 and was purchased by B.C. Ferries that year for $350,000.

Upon arrival on the coast, the Howe Sound Queen underwent a $250,000 refit and was then placed on the Bowen Island – Horseshoe Bay route.

On that route she was not-so-affectionately nicknamed the “Hound” for her lack of amenities and poor handling of heavy seas, West Coast Ferries noted.

Marshall said the Howe Sound Queen has been a great vessel for BC Ferries, adding that “our preference is always to sell used vessels for ongoing trade for commercial purposes.”

“If that’s not possible, then we would look to recycle the vessel in an environmentally friendly manner,” she added.