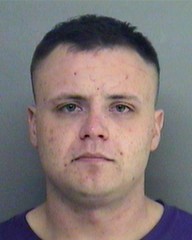 RCMP are asking for the public’s help in locating a 29 year old man.

Kurtis Timothy is wanted on a BC wide warrant for Uttering Threats.

Timothy may have a handgun and police say he should be considered armed and dangerous.

The arrest warrant was issued after a recent incident in Nanaimo where it is alleged Timothy threatened an individual.

He is described as white about 6 feet. tall and weighs 200 pounds.

He has short dark hair, brown eyes and has no visible scars or tattoos.