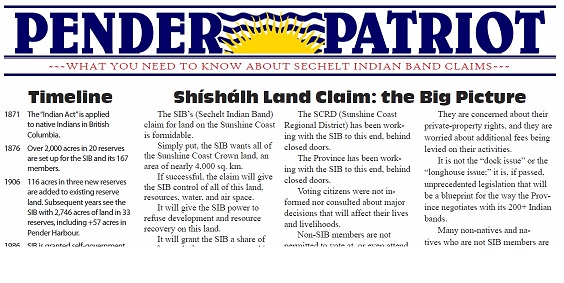 The publishers say it’s neutral information on some controversial issues in Pender Harbour, but the Pender Patriot is raising a few eyebrows.

Long time resident Myrtle Winchester says they want to put all the facts in people’s hands about things like the proposed dock management plan and Sechelt First Nation efforts to have more influence in their traditional territory.

And co-publisher Jane Reid, a former Regional District director,  says the tone of that meeting will likely determine if the Patriot publishes a second edition.

Earlier this week, a petition with nearly 2-thousand signatures was delivered to Victoria, calling on the province to hold off on the dock management plan, until there’s been wider consultation.