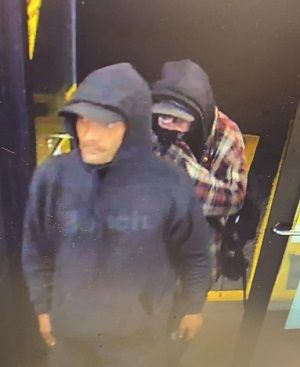 Nanaimo RCMP are seeking help in identifying two individuals who robbed a 7-11 at knifepoint last week.

At around 5am on August 20th, two men walked into the Terminal Avenue 7-11 with one walking behind the counter. With a knife in his hand, he demanded the money from the till. After taking an undisclosed amount of cash, he and the other suspect left the business.

Police were unable to locate the suspects. No employees were physically hurt during the incident.

The primary suspect appears to be Caucasian man with a thin build, of medium height and sporting a mustache. His clothing consisted of a blue hoodie pulled over a dark baseball cap, dark shorts and runners. The second suspect was wearing a black mask, a plaid jacket with a black hoodie underneath, and a ball cap.