Nanaimo RCMP commends use of police dog in takedown of man 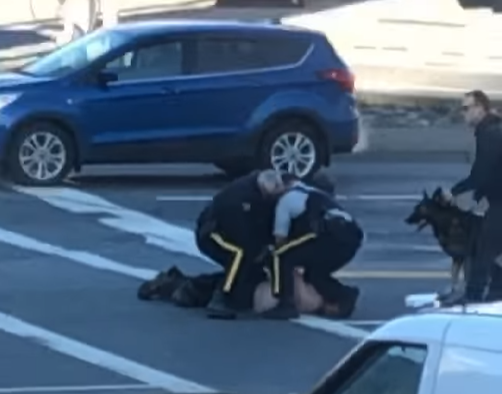 Photo provided with permission by Porsha Paladini on Facebook.

Warning: Some readers may find images, video, and descriptions in this story disturbing.

“This was an extremely volatile dynamic situation with significant risk to the man, the general public and the officer. Considering all the risk factors, the officer and Herc performed admirably,“ said Constable Gary O’Brien about an incident on Monday.

At 9:20am on Monday, RCMP stated that an off duty police officer and a police dog, Herc, were near the intersection of Esplanade Ave and Terminal. The officer heard yelling and was approached by a man with ‘with no apparent regard for his personal safety’ as he walked through traffic.

The officer followed the individual with his truck to the intersection of Albert St at Cavan St, where he was ‘ranting and raving.’ The officer— with his dog— and several citizens approached him and ‘learned that the man was very upset because someone had apparently stolen his suitcase.’

During the conversation, which RCMP state lasted several minutes and involved the man threatening the officer with death, the officer ‘noted that the man was sweating profusely, acting erratically and was walking back and forth into the flow of traffic.’

Other officers arrived at the scene, including a dog handler, who stated that the man was under arrest and he was to get on the ground, however, he did not comply. This video, captured by a citizen and posted to Facebook, is what ensued. It is graphic in nature.

The 47 year-old man was transported to the Nanaimo hospital for his injuries. While in the hospital the man ‘admitted he had consumed a large quantity of cocaine earlier in the day.’ After receiving treatment he was held in the Nanaimo RCMP detachment.

He was served with an Appearance Notice for one count of Uttering Threats, and issued with a court date to appear in Nanaimo Provincial Court for later in December.