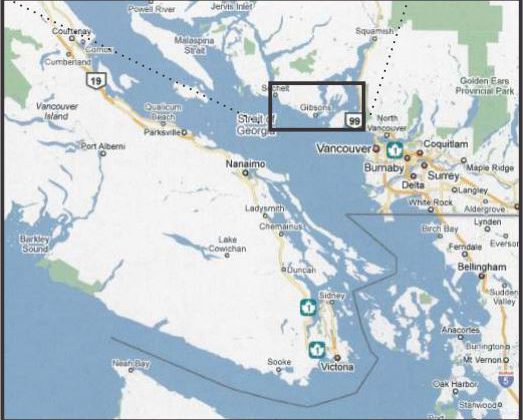 Work on the Town of Gibson’s stormwater pond has been stopped for what will likely be at least several months, after confirmation that historically significant archaeological material has been found there.

The discovery at White Tower Park is described in an archaeologist’s report as a volcanic stone item, a “distal portion of a bifacial projectile point,” triangular in shape and about five centimeters in length.

The projectile point was found during the early stages of the Town’s excavation work to add a stormwater detention pond behind the Gibsons Aquatic Centre. At the request of the Sḵwx̱wú7mesh Úxwumixw (Squamish Nation) and with the support of town staff, archaeologists were monitoring the site excavation when the discovery was made.

The site was not previously identified as one of archaeological significance.

According to the archaeologist’s report, the artifact “was located within a soil layer that had been highly disturbed and contained modern refuse, including bricks, glass, and asphalt pieces.”

The project site had been previously used for fill and efforts will now be made to determine where the fill originated.

The Town of Gibsons has consulted with the Squamish Nation on the White Tower Park project since the design phase and staff continue to be engaged with the Nation on appropriate next steps.

Security fencing has been placed around the project area and the work has been halted until a full archaeological assessment of the site can take place. This work is expected to take several months.

In the meantime, the public is asked to treat the area with respect and to not breach the security fencing.

More information on the discovery will be provided as it becomes available.