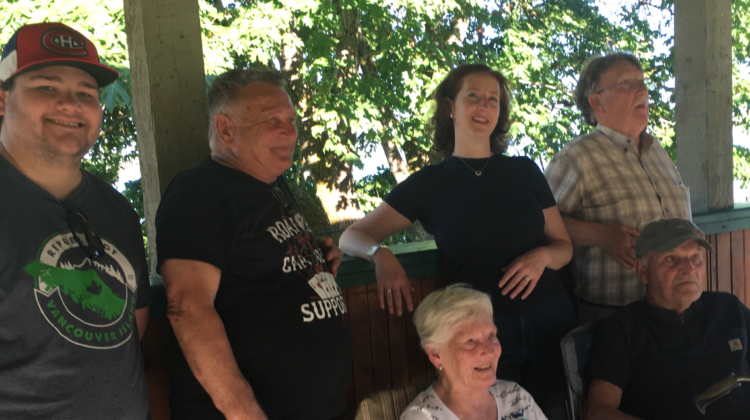 Tamara Kronis, a 47 year old Nanaimo resident is running for the conservatives. She has been in Nanaimo for around a year, and came to the island when her daughter decided to go to school in the area. After spending the pandemic on the island, she decided to move to the riding.

Kronis has been interested in politics since she was a young girl when she got involved in political campaigns, and she always felt the need to ‘exercise her voice.’

Kronis has had a varied career, starting as a lawyer, though she found an interest in the arts and went back to school to study goldsmithing. She has run a business as a goldsmith for the past 18 years. She had a chance to use her legal background when she did boardwork for the Human Rights Tribunal of Ontario as its Associate Chair.

She also has experience as a Trial Assistant at the United Nations International Criminal Tribunal for the former Yugoslavia, and as a Summer Law Clerk for the President of the Supreme Court of Israel.

We touched on three issues with Kronis and one topic that she thought was important to her platform.

An audio version of the interview is also available.

What is your stance on housing affordability?

Y’know, and that has a whole bunch of knock-on effects, people who would like to buy houses who are taking up rental units exacerbates the shortage of rental units. It has people who would like to live here but can’t find affordable housing elsewhere, which means there are holes in the job market as a result of it. There’s also foreign money that’s flowing into the housing market, which is also a complicated thing.

What Conservatives want to do is we want to make homes more affordable for owners and for renters. The way that we would do that is that we would increase the housing supply by building homes and by working with the municipalities and the private sector to bring new houses and rental units to the market. We would also look at the federal government’s portfolio.

We would also do some of the other things that are important to promote affordability. We would ban foreign investors from buying homes here if they’re not going to live in them, we would make it easier for young people and families to get a mortgage.

The end goal of the Conservative plan for affordable housing— including on Vancouver Island— is to be a reliable partner in addressing the housing needs of Canadians, and that’s all Canadians.

That’s sort of a description of the plan, and one thing we would never do is tax capital gains on people’s homes.”

In regards to recovering from the COVID pandemic, what are your priorities?

“Our priorities for recovering from the COVID pandemic really center around combating inflation. One of the things we’ve seen throughout this pandemic is- we’ve seen gas prices go up, we’ve seen grocery prices go up. We have got to get a handle on out of control spending that the federal government is doing because just piping money into the economy and handing it out is the cause of real inflation that is hurting all of us as we go about our daily lives.

We would do that in a variety of ways. One of the things we would do- we have a secure jobs plan that focuses on creating good jobs in the economy. We’ve got an infrastructure component to that.

The leader— Erin ‘O Toole— was in the riding last week and I’m delighted to say that he has supported my push for funding the fast ferry from Nanaimo to Vancouver. That’s an infrastructure project that will bring a lot to the riding. I’m also focused on other infrastructure, and I’d like to be able to tackle some of the major level irritants, like the lack of overpasses on the Nanaimo Parkway.

I want to see a Conservative government that is focused on infrastructure as an important part of recovery, really focusing on key projects in [the] riding, and I’ve got a list as long as my arm for a riding like ours.”

What are your short and long term goals for climate change?

“In the short term, one of the things that we need to recognize is that an approach to climate change that specifically tells people that they are bad and that they need to do more is not enough. We’d really like to see control over addressing the pressure we have around climate change. We’d like to see that be put back in the hands of ordinary Canadians.

As you know, one of the things that is frustrating about living here— out on Vancouver Island— is that we send a lot of money, it doesn’t come back. Right now, the carbon taxes that the federal government charges go into general revenue, and what we’d like to see is personal low carbon spending accounts that will allow Canadians to make the difference in their lives that will most impact climate change.

So, for some people that’ll be buying an electric vehicle, for other people that would be improvements to their home, for some people that may be electric bikes or electric scooters. What we want to see, though, is that money not to go to Ottawa but to go into low carbon spending accounts that people will be able to use to fight climate change on their own terms.

I think that what that’ll do is it’ll produce a real understanding and appreciation for what we can do as people to make a difference. The other thing we need to do— and this is something that we can do in the short term— is recognize that Canadian’s efforts are only part of the solution. We really need to, on a foreign policy basis, go after the big polluters.

We need to go after the big polluters who are responsible for things like overpackaging, which stresses our recycling systems and our waste systems. That’s a place where I’d really like to see us make an impact.”

Are there any other burning, important issues that are part of your platform that you’d like to talk about?

“I’ve already mentioned the fast ferry and the excitement I have around our support for it in the riding, and that’s going to be a real short-term goal of mine, and around building infrastructure, like the overpasses on the Nanaimo Parkway.

There are also some really complicated long term issues to tackle in this riding that I will be looking to getting into and really think about how the federal government can help. So, we’ve got a major plank in our platform around mental health. There’s not a household in this country that has been unaffected by mental health issues over the last few years. The pandemic has certainly made it worse.

Also, other issues around housing insecurity, homelessness, and affordable housing. There’s some people that have these issues and those issues and other people who have totally different issues but we need to get our heads wrapped around long term solutions for issues around mental health and addiction recovery and homelessness and access to healthcare for seniors.

Also, other issues that face Nanaimo specifically, like the chronic crime in our downtown core. That’s a much longer term, much more complicated set of issues, but I’m really looking forward to having a member of Parliament here in Nanaimo-Ladysmith in government and I’m hoping to be a member of Parliament in a Conservative government and I think that that will really make a difference for my ability to go through our plans and our platform and just figure out how to bring those promises and those commitments that we’ve made to economic recovery, to secure mental health, to affordable housing, for life here in Nanaimo.”

The federal election is slated for September 20th.

For residents in the Sunshine Coast, their Conservative candidate is John Weston.