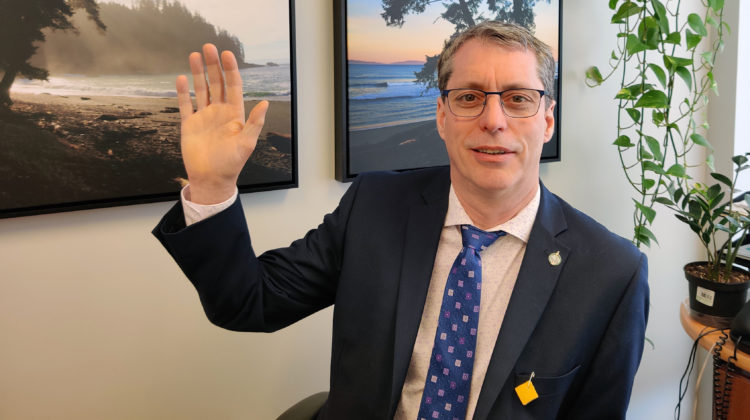 Born on Vancouver Island and growing up in Ladysmith, Manly has roots in the area with his grandparents farm close to Nanaimo. While he did move around he has remained in Nanaimo since 2001. He graduated from the Global Studies program at Vancouver Island University, which got him an interest in how international trade and agreements can affect local policy.

As a filmmaker, he got interested in politics while making documentaries and educational films. He focused on issues of social justice, environmental issues, and healthcare issues, among others. He has done film work for non-profit organizations, such as Nanaimo Foodshare and the Multicultural Society.

He worked in the film and television industry for 25 years, was a professional musician in his 20s, and has worked together with artist management companies (such as Atlantic Records, a US company, and another in Europe) to make international record deals for other artists. Manly has also worked in employment training skills programs with a focus on youth with barriers to employment and people with ‘diverse abilities.’

We touched on three issues with Manly and one topic that he thought was important to his platform.

The audio version is available as well.

What is your stance on housing affordability?

“An issue I’ve been working on in the House of Commons; we cannot build our way out of the crisis. So, I tabled Motion 66, which outlined a lot of the structural problems we have with housing affordability, including predatory investors in the housing market who are buying up a lot of the affordable housing stock that was subsidized to be built by the government in the 1960s and 70s and they’re turning that into market rate housing.

We’ve had an influx of foreign investment from the world’s ultra wealthy who are using Canada as a tax haven to hide their income and their wealth by using numbered companies and hiding who the beneficial owner is of residential real estate. That was really focused on Vancouver and Toronto, but now it’s become a problem across the country.

There’s been money laundering through residential real estate. In 2018 it was estimated it was $4.8 billion alone for Vancouver. This has driven housing prices up in Canada and made it really unaffordable for people to be able to buy a home or rent, because it’s driven rental rates up as well.

In one case, one of these institutional, corporate investors, CANREIT, is taking three times the affordable units that are being built currently and putting them into market rate housing. We cannot compete with that as taxpayers, so we have to address those structural issues. We do have to build far more affordable housing, but we need to protect the housing stock that is affordable now. The government should be looking at buying some of that stock and turning it over to non-profit and cooperative, affordable housing organizations. It should also be looking at regulation of our housing market.

Housing is for homes. It’s not a place for predatory investors to be making a lot of money. Since tabling that motion— Motion 66— other parties have adopted the language that I’ve been talking about and now the Prime Minister talks about predatory lenders when I was talking about regulating foreign capital in residential real estate.

Pierre Poilievre, the [previous] Finance Critic for the Conservatives, said we don’t need regulation, we need to completely deregulate, but now the Conservatives are talking about putting a two year cap on foreign investment. The NDP are talking about the need to fix these structural issues as well. So, I’ve been pushing the envelope in the House of Commons with good, solid policy, and research to back it up.”

In regards to recovering from the COVID pandemic, what are your priorities?

“All along, I’ve been working to make sure people were taken care of, so we called for emergency guaranteed livable income so that nobody would fall between the cracks during ‘stay at home’ orders. We did have a patchwork system and along I’ve been fighting to fix that patchwork and had some good success with the government. Right away when the government said they wanted to have a 10% wage subsidy I said that wasn’t enough and sent a letter right away saying it should be increased to 75% or 85%.

I think the wage subsidies had been encouraging people to go back to work and helping employers get workers back to work. A key for that recovery. We’re seeing more people vaccinated and we’re still going to have some problems around tourism industries like hospitality and tourism as we’re going into a fourth wave. We need to make sure those industries are properly supported and protected, and that people on low incomes in particular, aren’t overly affected by increased shutdown.

We had seniors and people with diverse abilities or disabilities, single parent families were really affected by a lot of the social service agencies having to shut down during the lockdowns. We want to make sure that people aren’t left behind as we keep on going through this pandemic.”

What are your short and long term goals for climate change?

All those subsidies need to be redirected towards renewable energy projects and transitioning workers to those types of projects. We need to take bold action now. We don’t have time to wait anymore and pouring billions of dollars into these fossil fuel projects is ridiculous, so it’s highly problematic.

In particular, fracking. We’re ramping up fracking in British Columbia for LNG exports, and fracking for methane releases methane into the atmosphere. It’s flared off into different parts of the process, all the way to when you turn on your furnace at home or turn on your gas stove, you’re releasing methane into the atmosphere. Methane is 80 times more potent as a greenhouse gas than carbon dioxide.

We need to stop fracking, we need to ban it, and we need to start transitioning off of fossil fuels and electrify our system as quickly as possible. That means building the east-west electrical grid so we can tie our hydro-electric capacity from British Columbia with Alberta and Saskatchewan. Manitoba has hydro capacity as well, Alberta and Saskatchewan have a lot of potential for solar power, for wind power, and for geothermal as well. About 10% of the abandoned oil wells have potential for geothermal potential. We have geothermal potential right down the Columbia trench in British Columbia. What we should be doing is sharing power on a grid east to west. Currently, everything goes north to south so that we can take advantage of the different capacities for producing electrical energy.

We also need to be getting people trained up as electricians and as trades people for retrofitting buildings to make them energy efficient. So, we’ve been calling for many, many years to eliminate tuition for post-secondary education. Like the northern Europeans, they have free post-secondary education and that would include trades. We can get young people into trades, so we can get the workers who need to transition trained to do the work that we need to get done for this energy transition.

We have to do it now. We can’t be waiting another 8 years to hit a target in 2030. We should’ve had a target for 2025— we don’t have a 2025 target. We signed on with Paris to say that we would have a 2025 target. The Climate Accountability Act that was passed in the House of Commons with the NDP and the Liberals holding hands under the table is one of the weakest pieces of climate legislation possible. The accountability in that act is that if you don’t like the government has taken, you can vote them out in the next election.

We didn’t get a 2025 target set, we don’t have an adequate target for 2030, and next 0, by 2050, is failure. We’re going to lose this battle for our children and our grandchildren, and for the safety and security of our own communities right now. In the immediate term, we need to be gearing up the army to be dealing with wildfires and floods in this country so we can have rapid reaction to when we’re in these emergency situations.

They’re monoculture tree farms after we clear cut old growth or second growth, we’re killing off the trees that we need to have a resilient forest and it’s the same here on the coast. Anybody who’s ever tried to burn alder— make a campfire with green alder— has seen that they can’t succeed because that wood doesn’t burn very easily unlike the other trees. We need to make sure alders and maples are part of the forest system, that we have a more biodiverse forest, to protect our communities.”

Are there any other burning, important issues that are part of your platform that you’d like to talk about?

“I’ve been working on a number of issues in the House of Commons. I table a motion to fix long term care that had been costed out by the Parliamentary budget office, and that was to improve care and long term care. To make sure that there’s enough beds for seniors, to make sure there’s a minimum care guarantee for the number of hours, that the workers are paid fairly, and also that homecare is available for those who want it so people can age in peace.

The Parliamentary budget office costed that out, and the Liberals have adopted that as part of their platform, which I’m happy to see. I’m always here to push good ideas and see how parties adopt those ideas.

I mentioned already eliminating tuition fees which is another thing. There are students graduating from post-secondary education who are just saddled with debt and it’s no way to start a career— with that kind of debt. So we want to eliminate tuition fees and actually provide bursaries the same way the northern European economies do. They’ve had great success in northern Europe. Germany, Holland, Scandinavian countries all have a very educated workforce and robust economies.

We need to be doing more with the resources we have, in particular with our forest industry for value added manufacturing like Sweden does, with the Swedish for common sense; ‘IKEA.’ Make sure that every stick of wood has that added value to it. Got that cardboard box, those nuts and bolts, and I think we can do a better job on the instructions here in Canada, but we should be making sure that our resources provide jobs and economic benefit to the communities. That way, we can preserve our old growth forests, by maximizing the use of our second and third growth forests.

I could give you a long list of the stuff I’ve been working on, I’ve been tabling motions and parliamentary bills in the House of Commons… Another one the Liberals have just adopted is to ban the export of thermal coal, which I tabled as a private members bill last December. Part of that is to deal with all these freighter anchorages in the Southern Gulf Islands. Why would be exporting thermal coal to be generating electricity in other parts of the world when we know that’s one of the worst ways to generate electricity?”

The federal election is slated for September 20th.

For residents in the Sunshine Coast, their Green candidate is Mike Simpson.