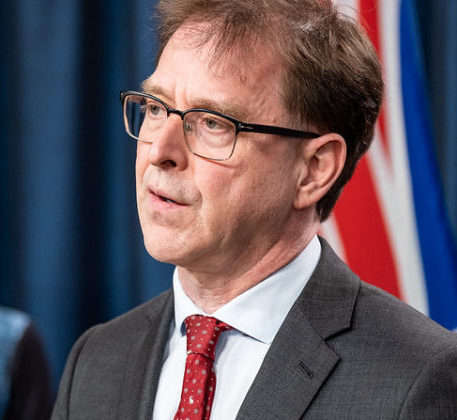 Health Minister Adrian Dix had some strong words for those still unvaccinated in the province on Thursday.

“Choosing to stay unvaccinated when we are able to be vaccinated is simply holding a red flag to a virus that spreads to live,” Dix says. “We need to know that after all we’ve been through, there is absolutely nothing heroic in presenting a target for Covid-19. There is nothing altruistic in attracting its infectious aim. There is nothing gained by anyone when someone falls victim to its vicious hold.”

Dix also mentioned demonstrators who protest outside of hospitals saying there are better places to protest.

“There are places to demonstrate that are not our public hospitals and I just think, and I say to everyone, that I think demonstrating in these circumstances, and interfering with our hospitals, and yelling at health care workers, serves no purpose at all,” says Dix.

The stats currently sit at 85.3% of the population in BC has at least one dose with 77.8% fully vaccinated. Dix says that young people are the fastest growing demographic of those getting vaccinated recently.

Early returns from the vaccine card program, he says that in the first few days since its release, there were over one million downloads.

“I want to thank British Columbians for their patience. 1.1-million within 47 hours of the card being launched in our province, I think is a demonstrated commitment of the people in BC and I’m very proud of the people who’ve done this work,” Dix says.

He also addressed concerns around issues with the PDF download system, saying, “The team at the ministry of health has done an exceptional job. They’re making adjustments every single day. We’re getting feedback and you can imagine a lot of it every day, that’s one of the issues we’re looking at we’re continuing to look and make improvements.”

“People need to get vaccinated, we have one of the best vaccination programs in the world,” Dix says. “There is a significant healthcare pressure right now, with the delta variant, people who are unvaccinated are unusually likely to end up in the ICU. There’s an easy response to that, and that easy response is to get vaccinated.

“Getting vaccinated in BC is not an issue of access. The only two issues really were before the summer – were an issue of supply – in other words we had to target groups. Either age groups or clinically vulnerable… and now we’ve had – and we still have – considerably more capacity to vaccinate than we have people getting vaccinated.”