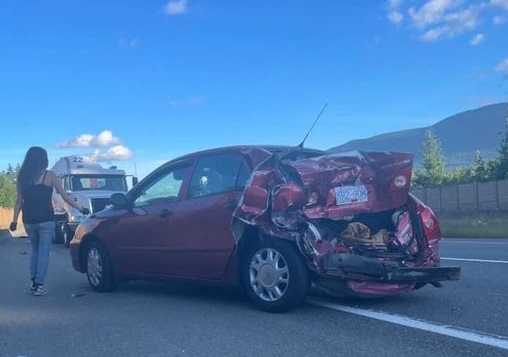 Picture provided by the mother of the 18-year old driver.

A 34 year-old man is facing charges of impaired driving following a hit and run on Monday.

According to RCMP, at around 7:15pm on June 7th, a red Toyota Corolla, occupied by an 18-year old female driver and 19 year old male passenger was struck from behind by a grey Ford Ranger pick up. By the time police arrived, only the Corolla remained.

Police investigation led to a home in Lantzville, where the suspect and his vehicle were located. RCMP say after failing two breath tests, the man was arrested. He was given a 90-day driving prohibition as well as several violation tickets, and had his vehicle impounded for 30 days.

According to several accounts, “the driver of the pickup was attempting to cut in behind the Corolla when it collided with the rear end of the vehicle, causing the Corolla to spin out of control.”

The driver of the Corolla was transported to the hospital for serious (but not life threatening) injuries. The passenger was not injured.

The incident occured on the Nanaimo Parkway, just north of the Mostar intersection.