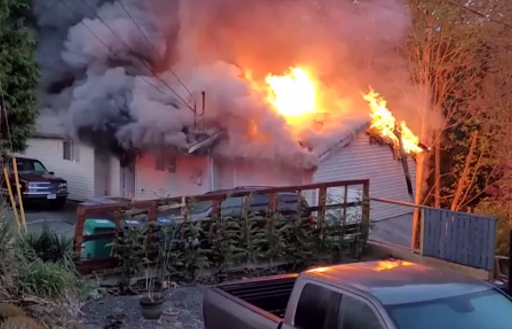 At 5:53am on Tuesday, May 4th, the Nanaimo Fire Department received reports of “explosions of fire” on 3000 Departure Bay Road. Nearby fire fighters were paged and arrived at the scene shortly after.

The fire was located in a small home. The  three occupants were all able to get out  safely.

Brad Wood, Assistant Chief of Operations for Nanaimo Fire Rescue, stated their investigators are on scene to determine the cause, which they should know by tomorrow.

Departure Bay Road has not been closed because of the fire, however, traffic is being controlled through the area, causing slight delays.