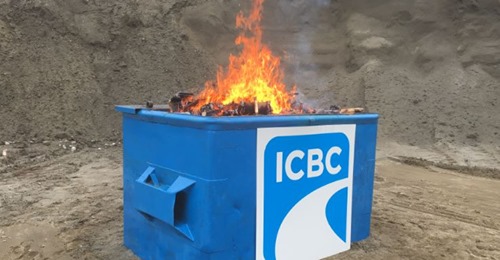 The province has announced that a one-time rebate of $190 is motoring into the bank accounts of BC drivers, likely in March.

While the COVID-19 pandemic has been devastating for nearly everyone, ICBC is an exception, as a provincial government release indicates that the insurance giant saved an eye-popping $600 million during the pandemic, due to major decreases in crashes and costs.

The Insurance Corporation of BC has come a long way since 2017 when former Solicitor General David Eby referred to its financial situation as a ‘dumpster fire.’

On January 29, 2018, the province announced that ICBC recorded a net loss of $935 million dollars for the first nine months of their fiscal year, projecting the annual loss to be in the ballpark of $1.3 billion.

The ICBC website indicates that the reason for the massive losses was an all-time high in car crashes in 2017 translating into daily claims costing the insurance giant a whopping $15 million dollars. This week’s announcement shows that the COVID-19 pandemic has helped ICBC turn the tides.

“As people’s driving behaviours changed during the pandemic, including staying close to home and off the roads, ICBC’s savings grew,” said Mike Farnworth, Minister of Public Safety and Solicitor General. “After assessing the full benefit of pandemic-related savings against ICBC’s bottom line, we are now set to deliver a significant rebate to millions of B.C. drivers.”

“Since the beginning of the 2020-21 fiscal year, ICBC has been pleasantly surprised by fewer reported collisions and lower claim costs, driving up revenue. That gain was met with lower premium revenue because of expired and cancelled insurance policies.

While the Canadian Federation of Independent Business said 180,000 small business are contemplating shutting their doors because of the pandemic, it has also brought record profits for others.

A CNBC Report shows Amazon and Walmart’s stock prices up 65% and 41% since the start of the pandemic, adding more than $70 billion to the wealth of Amazon’s CEO Jeff Bezos, and $45 billion to the Walton family.

So who’s eligible for the rebate?

Most customers with an active policy from April 1st to September 30, 2020, will qualify for the rebate and it’s determined by the portion of what BC drivers paid for their coverage during that period.

“We know precisely what people paid, for how long their policies were active (between April and September) and it is very accurate for us to be able to calculate,” said ICBC President and CEO Nicolas Jimenez.

“Our work to make life more affordable for British Columbians includes fulfilling our commitment to take earnings at ICBC that are related to the pandemic and give that money back to people,” said Premier John Horgan. “Those cheques will be in the mail soon.”

Farnworth encourages people to use the ICBC online calculator to see what your eligible for.

The province said refunds for the vast majority of eligible customers will be issued from mid-May through to July 2021 and will be returned to you based on how you paid for your insurance.

Cheques will start being mailed out next month and they are separate from the Enhanced Care refunds that ICBC customers begin receiving in May.

The basic insurance portion of the rebate requires BC Utilities Commission approval.