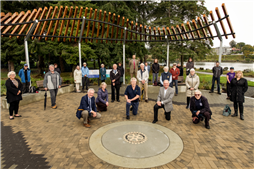 Nanaimo residents now have a new garden to visit in one of Nanaimo’s most popular parks. In spring 2020, construction began for the Rotary Centennial Garden as a way to commemorate the five Nanaimo and Lantzville Rotary Club’s 100 years of contributing to projects within Nanaimo.

Local Rotarians contacted the City of Nanaimo in 2016 to brainstorm ideas for a new project on the Nanaimo waterfront that could be implemented for the 100th anniversary in 2020 and would help create a legacy project to acknowledge their 100 years in Nanaimo.

“The City of Nanaimo is grateful for the Nanaimo Rotarians who have, for over the last 100 years, contributed to so many projects that have enhanced our community, says Nanaimo Mayor Leonard Krog. “The Rotary Centennial Garden is a wonderful tribute to 100 years of service and the many other amenities they have given to the citizens of this City.”

“The Rotary Centennial Garden is a reflection of our vision to create a beautiful, public space accessible to everyone. We greatly appreciate the City of Nanaimo granting us the use of the wonderful location in Maffeo Sutton Park. We also thank the City for all their cooperation during the planning and completion of the project. The local Rotary Clubs look forward to continuing to serve the community for the next 100 years and beyond.”

The location at the north east corner of Maffeo Sutton park was previously an open green space, but over the past few months it was transformed into a public garden inspired by the work and values of Rotary. These values include:

The garden is inspired by its location – the shoreline. The design emulates the waves and ripples of the ocean, the logs that roll up on shore and the vegetation that grows along the beach edges. The design also incorporates plants and materials to reflect the intertidal coastline of Nanaimo.

The Rotarians donated $200,000 to the City of Nanaimo in order to implement this garden in Maffeo Sutton Park.

Nanaimo Rotarians have a long history of improving local parks and facilities. Since 1920, they have assisted in the building and funding of projects, including a number of large scale projects, as well as the development of Bowen Park, Rotary Bowl and Track, gateways to Nanaimo, Rotary Field House and Northfield Park (now the Tourism Centre).