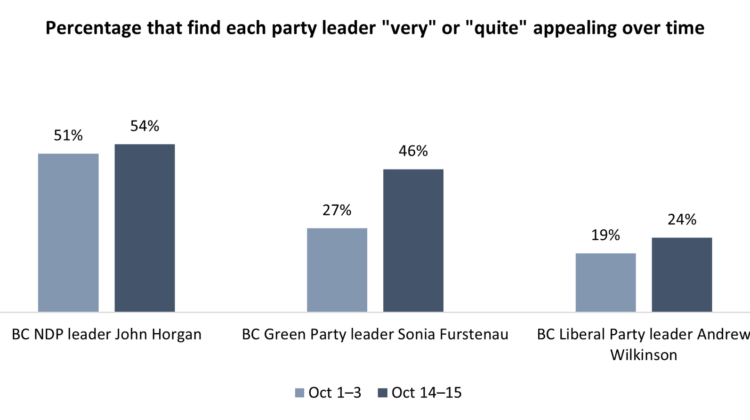 The recent televised provincial leaders debate appears to have done little to dampen the prospect of an NDP majority on October 24th.

The Reid Institute survey found 49 per cent of decided voters said they plan to vote NDP, while 47 percent of respondents to the Insights West poll said they would vote NDP.

Despite leader Sonia Furstenau’s strong showing Tuesday night, the support for the Green Party remained largely unchanged from before the debate. 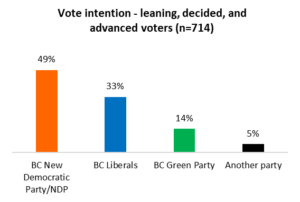 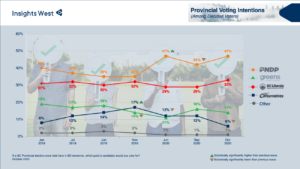 However, Furstenau’s personal appeal to voters was much higher following the debate. The Reid survey says the number of people who found her appealing increased from 27 per cent at the beginning of October to 46 per cent the day after she took her place at the podium between Wilkinson and Horgan.

ARI says that as it leader’s momentum surges, the Green party is the most common second choice among those people who have not yet locked in their vote.

According to both polls, NDP leader John Horgan was seen as having the best debate performance, followed closely by Green Party leader Sonia Furstenau, and Liberal leader Andrew Wilkinson doing nowhere near as well.

Insights West says that Horgan’s own constituents rated him most highly as 80-per cent said he did a “very good” or “good” job.

ARI says the number of British Columbians who are absolutely certain who they will vote for on October 24th has increased from 41 per cent to 49 per cent over the past two weeks.

However, half of the electorate remains less certain.

The Angus Reid Institute found that in this campaign voters are looking at the available options with disappointment.

“Overall, half of residents say they are ultimately voting for one party because they dislike the others more, not because they are overly drawn to their chosen party.”

Insights West President Steve Mossop says that while there have been fumbles by the BC NDP and BC Liberals during the campaign, “it doesn’t appear that these snafus have impacted the direction of the overall campaign.”