Another Month of Broken Records in Canadian Real Estate 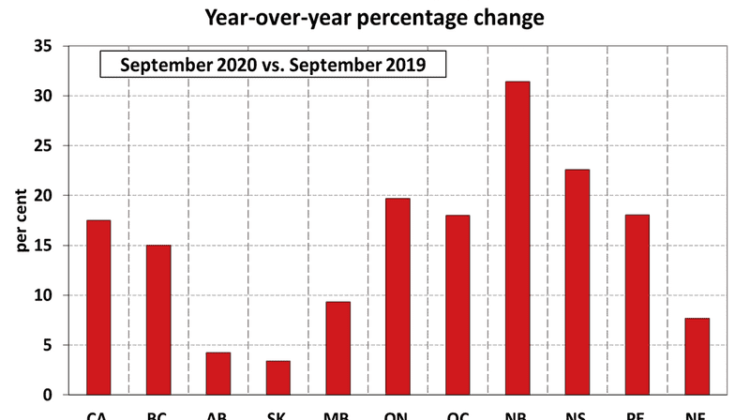 Home sales recorded over Canadian MLS® Systems edged up a further 0.9% between August and September, raising them to yet another new all-time monthly record.

The average house price is up around $90,000 compared to one year ago.

“ Many Canadian housing markets are continuing to see historically strong levels of activity as we enter into the fall market of this very strange year. Along with historic supply shortages in a number of regions, fierce competition among buyers has been putting upward pressure on home prices. “

Much of that was pent-up demand from the spring that came forward as our economies opened back up over the summer.

The number of newly listed homes fell back by 10.2% in September, reversing the surge to record levels seen in August. New supply was down in two-thirds of local markets, led by declines in and around Vancouver and the GTA.

The actual (not seasonally adjusted) national average home price set another record in September 2020, topping the $600,000 mark for the first time ever at more than $604,000. This was up 17.5% from the same month last year.

“ This is starting to sound like a broken record (about records being broken), but Canadian home sales and prices set records once again in September amid record-tight overall market conditions, as they did in July and August. ”

Vancouver Island remains a hot market for retirees and millennials

In a news release earlier this month, Vancouver Island Real Estate Board president Kevin Reid said “The strength of our housing market has surprised us somewhat. We frankly did not expect it to recover so quickly from the COVID-19 effect.” Reid attributes the recovery to familiar factors: pent-up demand, low mortgage rates, and persistent supply shortages.

The latter is an ongoing problem on Vancouver Island, which is a popular retirement destination and an attractive alternative for millennials seeking the West Coast lifestyle for less money than in Vancouver. The lengthy building-approval process also exacerbates the lack of housing supply at the municipal level.

Reid notes that while some area buyers are motivated by a desire for more space, COVID-19 has accelerated lifestyle changes for some consumers. “Our market is quite fluid right now, which makes it difficult to determine trends, but we have noticed that some buyers are advancing their retirement plans due to the pandemic,” says Reid.

“Economic uncertainty is motivating other consumers to downsize and reduce their debt load.” Although Reid expects the market to slow down in the coming months, he remains optimistic. However, he cautions sellers not to be unrealistic when it comes to pricing their homes.

“Correctly pricing your home is the key to a quick sale and may even result in multiple offers,” says Reid. “Overpriced properties tend to linger whether we are in a buyers’ or sellers’ market.”

While VIREB’s housing market remains strong, price-gain increments appear to be diminishing. Following a long period of significant gains, those numbers have tempered, with September posting a marginal rise in most regions.