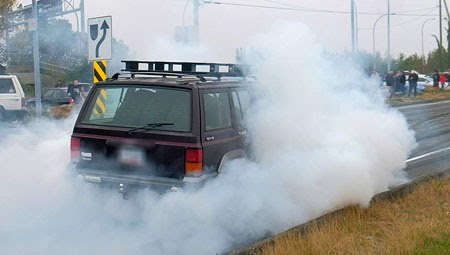 An area used for several years for drag racing and stunting has been shut down after RCMP officers swooped in and effectively put an end to the illegal activities.

The incident played out on Sunday, September 13th, at Jack Point, located near the BC Ferries Duke Point Terminal. The roadway was closed for approximately 4 hours while officers seized vehicles, issued violation tickets and dispersed the many people in attendance.

The operation, lead by the Nanaimo RCMP Municipal Traffic Unit and assisted by a number of other units from the local detachment.

According to RCMP, the operation resulted in 10 vehicles being impounded, 30 violations being issued under the Motor Vehicle Act (MVA), 23 Notice and Orders handed out for various defects and 11 vehicle inspection orders being delivered to drivers of vehicles deemed unsafe to be on any roadway.

The enforcement action was taken as a result of ongoing issues at this site.

“City of Nanaimo officials have spent countless hours and dollars installing traffic calming measures with the purpose of dissuading these activities, Over the past 5 years, dozens of complaints have also been received concerning the noise levels, including complaints from workers in the industrial area and residents of nearby Gabriola Island. Various enforcement actions over the years have failed to stop the activities. Unfortunately, these efforts did not work,”  said Constable Gary O’Brien of the Nanaimo RCMP.

“The video attached clearly shows a driver stunting by causing excessive smoke to build up by spinning his tires on the roadway. This activity destroys the roadway and poses a risk to not only the driver but the general public. For these reasons, this activity is prohibited under the MVA,”  said O’Brien. The driver of the vehicle profiled and 9 others, had their vehicles seized and impounded for a period of 7 days.

Approximately 100 people were in attendance and no criminal charges were laid by officers with respect to their behaviour. Stunting and drag racing on roadways is a dangerous practice and will not be allowed or tolerated by the Nanaimo RCMP, said O’Brien.

The investigation is continuing. Officers fully expect participants to set up at an alternate location. If anyone has information where this illegal activity is expected, please call the Nanaimo RCMP non-emergency line at 250-754-2345.