Warmer Weather Will Reawaken a New Threat to Honeybees 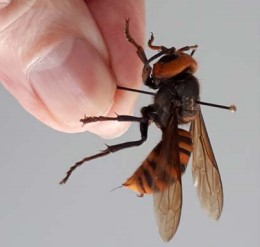 As the days grow warmer a new threat to honeybees that was first discovered on Vancouver Island last year is reawakening.

The BC Ministry of Agriculture People living along the border with Washington State from South Surrey to Aldergrove are being asked to watch for Asian giant hornets.

The hornets were first discovered in Nanaimo in 2019, where a nest was destroyed in the autumn.

In November of last year a single hornet was found in White Rock and December two were discovered in Blaine, just across the border in Washington, State.

The ministry says it’s believed the hornets are overwintering the area and traps will be put out in an attempt to capture the hornets.

Asian giant hornets are a voracious predator of honeybees and can quickly wipe out a colony. They hunt insects for food and are general not interested in people, pets and livestock.

The Agriculture Ministry warns that if a nest is disturbed the hornets “will attack with painful stings, which can be hazardous to people’s health.”

They are large compared to other hornets, with noticeably large orange heads and black eyes.

People who think they see an Asian giant hornet can report the sighting to the Invasive Species Council of BC.