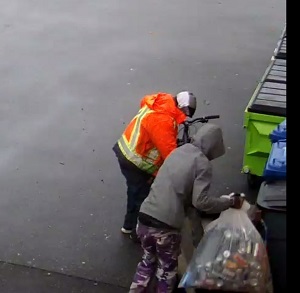 While it’s good to be visible when riding a bicycle – making a get-away after a burglary in an orange safety jacket is a little unexpected.

The RCMP in Nanaimo says two men broke into the Tim Hortons on Wallace Street a little before 7 am on Christmas Day.

Surveillance images from inside the franchise show one of the men putting an orange reflective jacket over his black jacket.

The pair took cash from the tills and stole a safe before getting away on bicycles – one of them still wearing the orange jacket.

The other was dressed in a light gray hooded coat with a white zipper down the front.

The RCMP have released images of the suspects and are asking for the public’s assistance in identifying them.