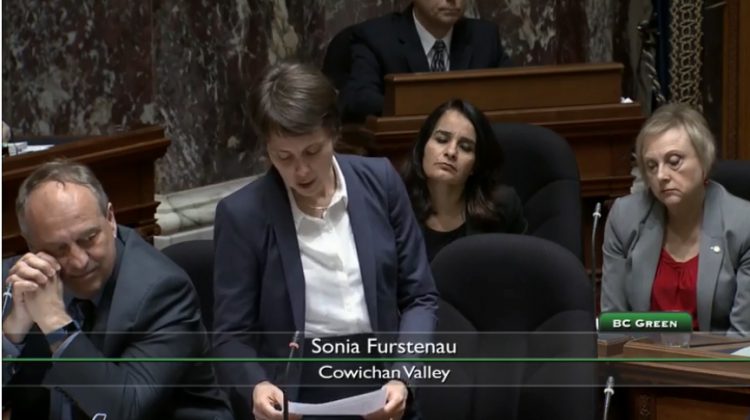 Sonia Furstenau in the legislature. Supplied by the Legislative Assembly of BC.

Two-thirds of the provincial Green Party contingent in the legislature will be on the Sunshine Coast to talk to locals about their concerns this week.

Green Party leader Andrew Weaver and Deputy leader Sonia Furstenau are touring the region and will be in Sechelt tonight and Gibsons Saturday.

Furstenau said transportation issues are magnified on the Sunshine Coast because of its dependency on ferries and the existing infrastructure.

“It’s a bit of a double-whammy over here and what I see in communities all over British Columbia,” said Furstenau. “Challenges around access to public transportation and options for transportation.”

Furstenau said, “One of the things we’re learning from these tours that we’re doing is that there are shared concerns across communities, particularly rural and semi-rural communities, across the province that are largely the same and point out where work needs to be done.”

The concerns of Sunshine Coast residents go far beyond those from a transportation perspective.

“We’ve heard concerns about the growing opioid crisis, the housing and homelessness crisis, deep concerns about water and about the sustainability of water in these communities. Of course, transportation concerns and how to cope with the changes we’re already seeing because of climate change,” said Furstenau.

Weaver and Furstenau will be at Mission Point House in Davis Bay from 7 until 9 tonight.

The public is asked to park at Davis Bay Beach.

Saturday morning, Don’t Trash the Future, which is meant to raise awareness about recycling runs from 9:30 to 11:30 am at the Kinsmen Hall at Douglas Park in Gibsons.