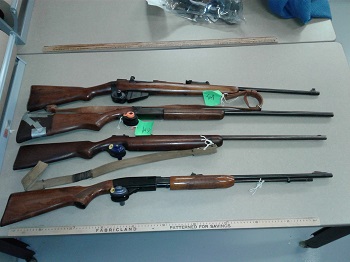 RCMP have located the owner of rifles seized from a suspect back on May 9th. (supplied by Nanaimo RCMP)

The Nanaimo RCMP is looking for the owner of four rifles.

Around 4:30 last Thursday morning police spotted a man walking with a large item over his shoulder in the vicinity of Northfield Road and Wilgress.

When the officer asked the man what it was he was carrying, the man initially said it was just a blanket but further questioning revealed the man had four rifles rolled up in it.

The rifles, equipped with trigger locks appeared to be in good shape and given the nature and time of the seizure, the 23-year-old man was arrested for possessing stolen property and transported, along with the rifles to the Nanaimo detachment.

Along with the trigger locks, each rifle had the tag with the name Tim attached.

Serial numbers, make and models of each were recorded and to date, there is no indication the rifles were reported stolen or involved in any crimes.