Smoke alarm may have saved lives in early morning fire 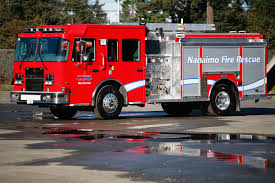 An early morning fire forced five residents from their home on Beach Drive in Nanaimo this morning (Tues).
Nanaimo Fire crews where able to contain the fire quickly and the damage to the home was limited.
The occupants of the home had been sleeping when the smoke alarm went off.
Two men were treated on scene for smoke inhalation by BC ambulance but were not transported to hospital.
Fire investigators are still trying to determine the cause of the fire.Karen Fry, Acting Fire Chief says, in this case, working smoke alarms may have saved lives.
Residents are encouraged to check their alarms and if they are over 10 years old or are not working, replace them.
Facebook
Twitter
ReddIt
WhatsApp
Email
- Advertisment -
- Advertisment -
- Advertisement -