With the ongoing drought, and the heat wave predicted for the coming days, the Coastal Fire Centre has announced a campfire ban.

It will go into effect at noon Saturday, June 27.

Drysdale says as well as keeping an eye to the skies for rain that could lessen the fire danger, they’re also watching for lightning which could spark new fires.

The red area below is where the ban will be in effect. 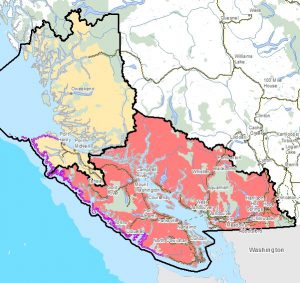