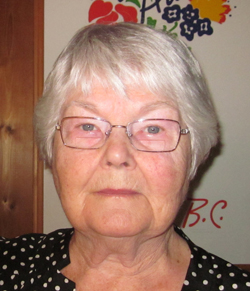 This year’s Lieutenant Governor’s Award for Literary Excellence is going to a Sunshine Coast resident.

Betty Keller, is a well known writer, editor, literary mentor, and a founder of the Sunshine Coast Festival of the Written Arts

The award is part of the BC Book Prizes.

Keller says BC authors have a unique voice, but it didn’t get a lot of notice outside the province in the early days.

Several other local writers are also up for awards…

Julie Angus of Comox for Olive Odyssey: Searching for the Secrets of the Fruit That Seduced the World

Editors Richard Beamish and Gordon McFarlane of Nanaimo for The Sea Among Us: The Amazing Strait of Georgia.

And Chieri Uegaki of the Sunshine Coast is nominated for her Children’s book Hana Hashimoto, Sixth Violin

The winners will be announced a Saturday’s gala in Vancouver.